Updates From Save Tucker! 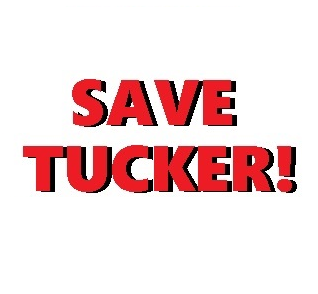 It has been a little while since we updated our blog, so we wanted to let you know that we're still here and we're still following the issue of new cities in the metro Atlanta region.  We try to give you our two cents on most of these topics, as often as possible.  But, even being prolific bloggers and involved citizens, we still need a break sometimes.  Plus, we wanted to give the new city of Tucker a chance to really get up and running before we started to point out anything that might be a cause of concern.   Since we live here, we are very hopeful that our new city council members and the mayor will be the upstanding citizens they want us to believe they are.  And, we want to believe that they have the best interest of all Tucker in mind with every decision they make.

Of course we are still skeptical because of things like this:
Yes, that's three of our elected city leaders trying to evade a simple question just a day or two before the vote on city hood.  So, if that's what they do when they want our trust, what are they doing now that they don't really have to care about whether or not we trust them (unless they want to be re-elected when time comes).

GETTING A CITY STARTED ....
If you have been following the city meetings, you may know that they have hired some staff members, adopted a zoning code, taken over code enforcement at least in theory, and  they have found ways to fund everything so far.  They have opened a city hall and started a web site.  And, they have had many, many "special called" meetings, which usually means the public has less than 24 hours to find out what it is that they are going to meet about and how it might impact them.

DISTRICT 2 STILL AT RISK
In the meantime, our District 2 has probably been suffering the most while waiting for Tucker (the city of) to get its act together.  District 2 has no Super District representation right now and their regular district is not covered by Nancy  Jester like the rest of Tucker.  Instead, they have Sharon Barnes Sutton, who lost in the preliminary election to challenger Steve Bradshaw.  You can read more about him here:  VOTE Steve Bradshaw.  And, remember, if you voted for Bradshaw, the job isn't finished, yet.  He still needs your support in the November election, right around the corner, before he can be officially named as the new commissioner in DeKalb's District 4.

While it is a good thing to know that the ethically challenged Barnes Sutton is going to be replaced, the bad thing is that she has already announced that she doesn't feel it is her job to represent people in cities.  So, basically, there is no one interested in protecting the District 2 residents from potential harm during the interim period.

What kind of harm?   Well, how about the kind of harm that comes when a new town home development is approved without any plan being discussed for storm water runoff.  And, that builder, SR Homes, decides to go ahead and clear cut the entire buffer even after he agreed to leave 20 feet of it in place?  That's what is going on behind the former Big Green Egg warehouse.

WHERE FOR ART THOU, CODE ENFORCEMENT?
Or what about homes that are abandoned or have fallen trees on them and no one is doing a thing about it?   That's another problem in District 2 that the new commissioner will hopefully do something about as soon as he takes office.  But, aren't some of these issues the kind of things that people thought a new city was going to do better than the county?  So far it seems the very creation of the city is exactly what is causing the neglect and the lack of rule following by the big developers who want to put multi-family housing anywhere they can find the room.


Wasn't the new city supposed to PROTECT the single family neighborhoods and ENHANCE the quality of life we all enjoy right now?  Won't these new developments bring potential crime to our area?  Won't they become fire hazards, judging from the number of apartment fires one can see reported in the news on any given day?  And, won't they add more traffic to an already gridlocked 285 for those who chose Tucker because it gave them an easier commute to work than they would have if they were to live further away?

INNOVATION - JUST LIKE EVERYONE ELSE HAS DONE IT
But, none of that really matters because they have hired an out-of-state company to help them navigate all the city related business anyway.  CH2M (minus the "Hill" part), the former provider of government outsourced services for Sandy Springs, was hired to pretty much run everything.  If Tucker is like most other governments, that relationship will be good for about two years until we can no longer afford it and they decide to bring things "in house" and set up a regular government just like everyone said we wanted to get away from.  Ho Hum.  It's so predictable it is hardly worth mentioning.  But, in case you are interested in what things will be headed our way if we follow the same path, here's a great article about it:  "Big Change in Sandy Springs..."

We're trying to stay positive, but there is a lot going on with our new city that seems to be cause to at least raise one's eyebrows over.   Like the huge development being discussed for the intersection of Mountain Industrial and Lawrenceville Highway... potentially named "Tucker Town Center."   Suddenly, the "center" of town is going to be a lot closer to Smoke Rise than it used to be, if you are following the general plan and reading between the lines.    Where will the town homes and "affordable" housing be located in District 1?   Or, did the pro-city activists actually start a city of Tucker in order to protect their own investments while significantly harming everyone else's?  Time will tell, right?

COME OUT OCT. 17 TO THE COMMUNITY ENGAGEMENT MEETING!
We hope you will tell your elected officials how you feel.  Good.  Bad.  Or Ugly.  (Shout out to the FB group by that name! )

In District 2, the representatives Noelle Monferdini and Matt Robbins are actually asking for feedback.  They are hosting a community engagement session Monday, Oct. 17, starting at 7 p.m., at Rehoboth Baptist Church Auditorium, 2997 Lawrenceville Highway in Tucker.  The meeting is expected to go until 8:30 p.m. and will include an overview of the new city's comprehensive plan.  To their credit, Monferdini and Robbins are making efforts to talk with the residents in their area before voting on plans that will impact the future.  If the other city council members are not doing this same type of event, perhaps they should consider it.

They are at least asking to hear from you, so what do you have to lose?  We thought the other districts were doing the same thing, but now that we checked the city website, not even the District  2 meeting is mentioned.  It's not on the calendar.  So, we will be sending them a message to find out what's going on.  We will post an update on our Facebook page.  If you are not already following us, please do:  Our public Facebook page is here:  https://www.facebook.com/SaveTuckerFromLakesideCity.

Popular posts from this blog

Welcome to Smoke Rise, Soon to be Tucker, GA

January 05, 2015
The driving force behind the city of Tucker has been the leadership within the community known as "Smoke Rise, GA."  Smoke Rise residents currently have addresses that say "Stone Mountain, GA" and many of them worked hard in order to create a separate identity for themselves, petitioning the U.S. Post Office to change their official name to "Smoke Rise."  While the Post Office did not agree to change the official name, they did agree to allow "Smoke Rise" as a recognized alternative to "Stone Mountain" that could be used interchangeably as long as it accompanied their 30087 zip code.

It is important to note that these residents did not ask the Post Office to recognize their use of "Tucker" as an acceptable alternative.  They asked to be called "Smoke Rise."

It appears that zip codes and address labels are important to them, just as our Tucker zip code is important to us.  And, while we do understand that Smoke Rise…
Post a Comment
Read more

Tweak us out of LaVista Hills

March 25, 2015
This is a letter shared with the "Dekalb Strong" group.  You can join the conversation at https://www.facebook.com/groups/DeKalbStrong.
We didn't realize how easy tweaking was. “Tweak” and just like that, 2000 people are moved from one city proposal to another. (“LaVista Hills, Tucker border tweaked in Senate,” News, March 20). Our home is in Toco Hills on the southern edge of the proposed LaVista Hills and we’d like to be tweaked out of it. North and north central DeKalb County residents have become pawns in the misguided ambitions of a few. With all the changes made by the Senate and House, it’s vital the feasibility of these proposals be revisited. The LaVista Hills boundaries have bled commercial property to the Tucker proposal and Brookhaven’s annexation of Executive Park.

As reconfigured, LaVista Hills is almost entirely residential. Even including Toco Hills shopping center and Northlake mall, there appears to be insufficient commercial or industrial property to sup…
Post a Comment
Read more

Look What the Non Elected, Interchangeable Leaders of LaVista Hills Have Done NOW!

December 01, 2014
The children in the homes on one side of this street are zoned for Livsey Elementary.  The children on the other side of the street are zoned for a Gwinnett County school, yet their front yards are located in DeKalb County.  They get some services from one county and some from the other.  Since the Tucker zip code and Tucker community has spanned both counties, these folks (on both sides of the street) have ALL been a part of the TUCKER community, without any question or doubt.... until now.

With the city groups and their newly redesigned maps that do not reflect our current community, these folks are being completely written off.  The city of Tucker map takes in the entire area up to the DeKalb / Gwinnett Line, but the new LaVista Hills map stopped right in the middle of the road, exactly matching the school attendance zone.  So, did the petition drive itself map out the attendance zone and seek out signatures in that manner?